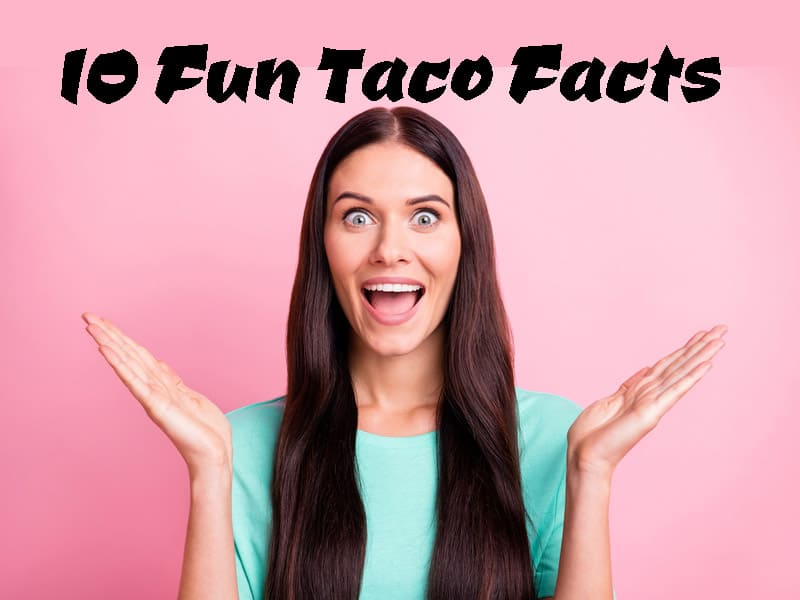 There’s little doubt that tacos are one of the most popular foods on the planet. It isn’t just Mexican people who eat Mexican food, after all. Everyone loves it, and tacos are eaten every day by people all over the globe. If this is one of your favorite snacks, keep reading because here are some fun and surprising facts about tacos.

The word “junk” food has gotten a bad reputation, but junk food is not necessarily a bad thing. Junk food is comfort food, which means that it’s the perfect food to eat when you’ve had a bad day, are stressed about something, or you’re just plain hungry and you need a full belly. People search out comfort food for various reasons, and it’s always there to satisfy. In this way, tacos can indeed be considered junk food.

That being said, “junk” food also refers to food that is completely non-nutritious and in fact bad for you. However, tacos do not qualify as junk food under this definition. Tacos are fairly nutritious when compared to other fast food, in part because they are filled with meat, cheese, and veggies. Furthermore, you can put anything you like on a taco, which means that you can make them as nutritious as you want.

2. Are Tacos A Sandwich?

Technically, no, tacos are not a sandwich. Sandwiches have a lot of the same fillings as tacos do – including meat, veggies, and cheese – but are always made with some type of bread. This can include regular white bread, whole-wheat bread, French bread, Italian bread, and so many others. In fact, you can make a sandwich out of all types of breads, including pita bread. However, taco shells, be they hard or soft ones, do not actually qualify as bread. Therefore, tacos are not technically sandwiches.

Of course, some people may consider them a sandwich because they consist of ingredients that are “wrapped” by a shell of some type. However, since the shell used isn’t typically bread per se, most people don’t consider tacos a sandwich.

Tacos are so good and so popular because they contain ingredients that almost everyone loves. Most tacos include some type of meat as well as cheese, tomatoes, and lettuce. You can also include other types of protein instead of red meat. In addition to ground or sliced beef, you can put other forms of protein on your tacos, including chicken, pork, and even fish.

If you like, you can even make a vegetarian taco by eliminating the meat altogether. Lots of people just eat the cheese and vegetables. If you want to put a substitute meat on your taco, including tofu or meat-free “meat,” you can do that as well. The fact that you can stray from tradition and include any foods you consider yummy on your tacos is one of the reasons why they’re so delicious.

4. Are Tacos Supposed To Be Crispy?

Originally, tacos were only made out of soft, flour-based tortilla shells, but today we eat tacos with both soft shells and crispy ones. Traditionally, a taco is not considered a taco unless it’s in a soft taco shell, but that’s not the case in America.

Americans love both soft and crispy tortilla shells. In fact, many taco-making kits sold in supermarkets contain both types of shells so that the buyer can choose. In this day and age, it’s considered a taco whether it’s made out of a soft shell or a crispy one, so you certainly have some options when it comes to making the perfect taco to meet your needs.

Tacos are messy for one main reason. Their crispy shells do not close up all the way. Therefore, the ingredients can easily fall out when you’re trying to eat them. With soft tortilla shells, this isn’t a problem because you can close the shell all the way around the meat and other ingredients (so they don’t fall out). Crispy tortilla shells are also made in many different sizes. The larger ones hold even more ingredients than the standard ones, which means they have the potential to be messier.

Of course, their messiness is one of the main reasons why people love tacos so much. They’re a fun snack to eat, and besides, you can always pick up all of the food you left behind after you finish eating that tasty shell!

For anyone serving tacos at home, check out this helpful taco holder which I added to my list of fast food decoration ideas.

6. Do Tacos Have Cheese?

Many people think that tacos always have cheddar cheese and no other types, but the truth is that tacos can have any type of cheese you want. This includes mozzarella, Swiss, Pepper Jack, or any other type of white or yellow cheese that you love. As long as it’s shredded, it will taste great on your taco.

When you make tacos, the important thing to remember is that they should always have some type of yellow or white cheese on them. After all, tacos without cheese is like pizza without cheese, and neither of these is a good option for most pizza and taco lovers.

7. Do Tacos Have Lettuce?

Typically, tacos do have lettuce on them, along with meat, shredded cheese, tomatoes, and other ingredients that you consider important. Examples include guacamole sauce, olives, diced onions, taco sauce, etc.

Remember that tacos can be personalized, which means you’re able to have them according to your own wishes. Whether you like your tacos spicy, traditional, or made with all types of unusual ingredients, there’s always a way, especially if you make the tacos yourself.

8. What Is the Difference Between Tacos And Burritos?

The ingredients inside of a burrito can be just like those inside of a taco, meaning the maker can decide for him/herself exactly what to put on them. In fact, just as there are chicken, beef, and fish tacos, there are burritos made out of all sorts of protein sources. Many burritos are also made with beans, while tacos are usually made without beans.

The main difference between a taco and a burrito, is that a burrito is completely enclosed and therefore none of the ingredients can fall out when eating them. A burrito is usually enclosed at all ends, so the chances of any ingredients falling out are very small. In addition, some burritos are covered in some type of sauce, which is something that you won’t see with a taco. Finally, burritos are eaten with a fork and knife, while tacos are always eaten by hand.

That being said, tacos and burritos usually contain the same or similar ingredients. They mainly differ in how they are made and how they are eaten. And both are delicious!

9. Are Tacos Or Burritos Better?

Both tacos and burritos are great Mexican dishes, but they each appeal to certain people. For instance, you might prefer tacos if you:

On the other hand, you might want to choose burritos if you:

Burritos are found in nearly all Mexican restaurants, as are tacos. Tacos are considered a more “casual” food and burritos are looked upon as being a bit “formal.” One thing is certain: You’ll find lots of restaurants that serve both of these tasty dishes almost anywhere you go, and you won’t be disappointed by either one of them.

10. Why Are Tacos So Popular In Norway?

As most people know, Mediterranean families tend to gather frequently and share a meal. But in Norway, and indeed throughout northern Europe, this was not the case until around the 1990’s. In the 1990’s, tacos were introduced to Norwegians as an exotic food that could be shared as a meal with family and friends. The popularity of the snack took off immediately. After all, the “culture” associated with Mexican food is just as exciting as the food itself.

Since then, tacos have grown tremendously in popularity in Norway, along with other Mexican dishes that they’ve all learned to love. The foods have brought them closer together and introduced them to a whole new way to eat and share snacks with others. I believe that tacos will remain popular in Norway for a very long time.

Obviously, tastes differ. If you’re a big taco lover, chances are you prefer to have some in a Mexican restaurant with a nice drink and helpful waiters. On the other hand, tacos can also work as fast food. I personally enjoy to make them myself at home. Back in the days we used to have “taco tuesday”, but nowadays it’s more of a spontaneous decision to prepare a few (whatever day it is). Here’s one of my favorite taco recipes.

For all lovers of Mexican food, consider to also read my frequently asked questions about Chipotle.

I guess that having a burger with French fries after a long night of clubbing is probably easier to eat than a taco, especially tacos with hard shells. However, I find tacos more tasty, which again is a personal thing (also read my frequently asked questions about Taco Bell) . I do enjoy my burger or my chicken nuggets at times, which is why I try to cover every fast food snack I have at least tried once (also read my Burger King facts if that’s your favorite place to go).