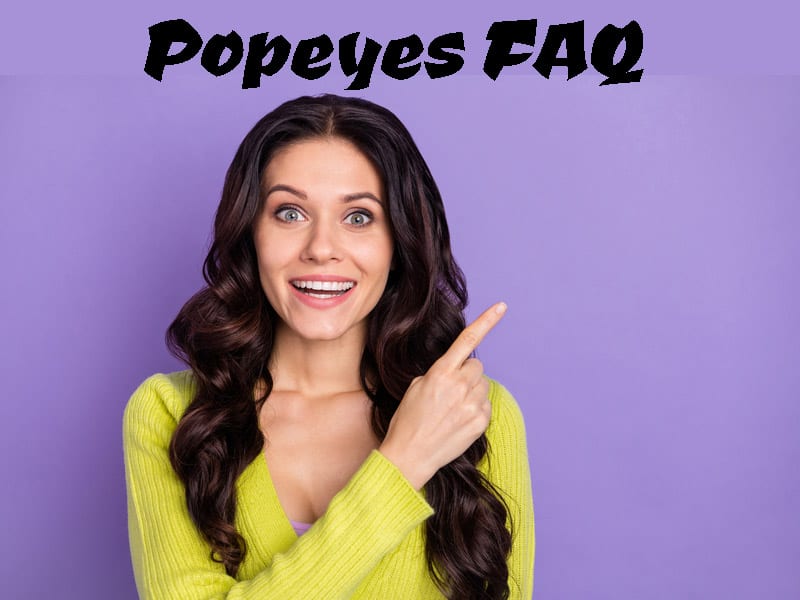 Whether you’re from New Orleans, love Cajun food, or just adore fried chicken and shrimp, chances are that you’ve heard of Popeyes. Maybe you’re a regular patron, or maybe you’re interested in giving it a try. Either way, there’s more to Popeyes than meets the eye. Let me answer some of the most frequently asked questions about them.

Yes, very much so. Popeyes was founded in 1972, decades after other fast food mainstays like McDonald’s and Jack in the Box. The first Popeyes opened in the Arabi suburb of New Orleans, Louisiana. They served more traditional Southern fried chicken, and was called “Chicken on the Run.”

However, the first few months weren’t too successful. Therefore its founder, Alvin C. Copeland Sr., changed their name to “Popeyes” after Popeye Doyle in The French Connection. With the name change came a change in culinary approach, as it started serving the New Orleans-style spicy chicken for which it is known today.

That really depends on what you consider “junk food.” If you conflate “junk food” and “fast food,” which so many do, then the answer is yes (tasty “junk food” though it may be.) However, if you consider the ingredients of Popeyes’ menu, the question becomes more complicated. No one should eat Popeyes every day, and “healthy fried chicken” is arguably an oxymoronic phrase.

That said, Sherlock Holmes, disdainful of Scotland Yard’s inspectors in the stories, famously called Inspector Lestrade “the pick of a bad lot,” and there is some evidence to suggest Popeyes occupies the same place among fast food fried chicken options. In an interview with Mel Magazine, Dana Hunnes, senior dietician at the UCLA Medical Center, reviewed different fried chicken options with Ian Lecklitner, with Popeyes ranking second, ahead of fried chicken rivals KFC and Chick-Fil-A.

Don’t get too excited, however. Hunnes and fellow New York-based nutritionist Allison Knott contributed to a Healthline article knocking the fast food fried chicken chains’ Twitter war over who was “healthiest.” As Knott puts it, “The fried chicken sandwich wars have nothing to do with nutrition.”

As I explained in my Panda Express FAQ, his is a subjective question. It depends in part on what type of Popeyes chicken you order. If you order their regular chicken, then probably not. However, if you order their Voodoo or Handcrafted Spicy Tenders, you should expect a bit more of a kick.

Even spicier than their chicken recipes, however, are the accusations of animal cruelty that have dogged Popeyes in recent years. A Change.org petition calling for a change in their practices gathered more than 159,000 signatures. On the plus side, activism such as that may have an effect, as Popeyes signed a “Better Chicken” pledge in 2020.

The Internet loves to make up stories about what’s “real” or not in the world of fast food. While there are plenty of horror stories for other foodstuffs out there, yes, Popeyes’ shrimp entrees are made of real shrimp.

Home-cooked turkey is a staple of Thanksgiving dinners across America. However, if you’re terrible at cooking, can’t afford a home-cooked bird (though the average price actually dropped in 2020) or just don’t feel like cooking, Popeyes offers a fast food alternative turkey.

If you’re skeptical, that’s understandable. While their turkey is somewhat pricier and spicier than traditional turkeys given its Cajun twist, it has actually been received pretty well.

This is obviously subjective, but it’s fair to say that Popeyes’ lemonade is one of its more attractive drink options, at least according to the Internet. Their new Frozen Strawberry Lemonade has received a ton of attention.

7. Does Popeyes serve Pepsi or Coke?

As of now, Popeyes lists Pepsi on their website, along with Lipton Iced Tea, Mug Root Beer, and Mountain Dew. However, they are in the minority making that choice. In 2017, Business Insider examined 39 fast food chains’ choice of beverage, with the majority of chains opting for Coke, including heavy hitters such as McDonald’s, Burger King, Jack in the Box, In N Out, and Wendy’s. Joining Popeyes on the Pepsi side were chains such as Taco Bell, Dairy Queen, and KFC.

Sweet tea is “a Southern thing.” If you’re a casual sweet tea drinker, you may like Popeyes’ offering just fine. However, if you’re a connoisseur, you may be a bit choosier, though of course it’s all a matter of taste.

If you think that Popeyes has slow fast food service, you’re not alone. They’ve had that reputation for years. They’re not alone in having poor service time, either, a fact noted in a 2016 Delish article that speculated that “a disinterested workforce” at Popeyes and other fast food chains could be behind the slower service. (If true, that wouldn’t be surprising, given how little fast food workers are paid.)

I personally believe that patience is often a requirement when it comes to fast food. I mean, a 5 – 10 minute wait is pretty “normal”.

10. Why is Popeyes so expensive?

Unlike other subjective elements here, we can actually compare the cost of Popeyes against other fast food companies. Popeyes’ Classic Chicken Sandwich tied with KFC’s equivalent as the least expensive of six ranked options in a 2021 hot take by Eat This, Not That! Both of their sandwiches cost only $4.99.

If you think that other items on the Popeyes menu are expensive, it could be worse. Momofuku Fried Chicken, an upscale Asian restaurant chain specializing in elite cuisine, charges as much as $100. I’m just saying.

11. Why is Popeyes so popular?

For one thing, Popeyes has certainly carved out a unique niche for itself. What other New Orleans-style fast food chicken places can you name? Who else is as famous for their fried shrimp offerings? That said, Popeyes ranks only #17 in a 2021 ranking of 50 fast food restaurants.

12. Does Popeyes give free water?

No, they do not, nor do most fast food places today. The way things generally work is you’re given a cup with your order that may be refilled with water or other soft drinks if the restaurant has a fountain for customers to use. However, these are going away quickly, so free water and free refills are becoming a thing of the past.

No, you can’t, nor can you tip at many other fast food restaurant in America. On the one hand, that’s unfortunate, since fast food workers already work for far less money than they are due according to economic estimates of the value of their labor.

On the other hand, there’s a certain irony to that, since tipping today is way more of an American thing than a European one. While gratuities exist at European restaurants, they are far more often included in the meal itself, or else are spread evenly among all of the restaurant staff, rather than you tipping a single server that you like. It’s also worth noting that European staff at fast food restaurants are often far better paid than their American counterparts, and so are less dependent on tips.

I do tip whenever that’s possible. That’s why I like the tip jar at Starbucks for example. It’s a way of showing my appreciation.

Every fast food chain has certain pro’s and con’s. Various restaurants serve different meals and spices, which makes them unique in their own way. If Popeyes matches your taste, well, it’s good to have them and to appreciate their effort. A little waiting is part if the deal if you ask me. And hey, waiting is a thing with every fast food restaurant out there. However, since many people are in a hurry these days, some decide to bring fast food into their own kitchen. This gives them the opportunity to work or do something else while waiting for their food. If you’re interested, check out my fast food decoration ideas for home and kitchen.