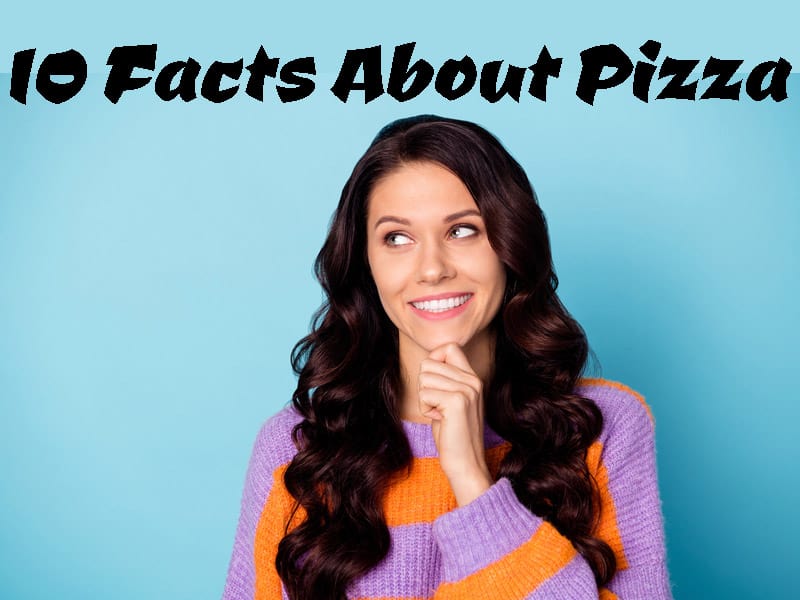 Pizza is by far one of the most popular meals on the planet, for obvious reasons. Pizza is chewy, delicious, and filled with melted cheese, so what’s not to like about it? If you’ve always been a pizza lover but you’d like to learn more, you’ve come to the right place. Below I list 10 surprising facts you likely didn’t know about pizza.

That depends on how you look at it and what you consider “fast food.” There’s certainly nothing fast about the way pizza is cooked. In most pizza places, you have to place your order and then wait for it to be custom-made. Even if you order a pizza for delivery, they have to make it first. That’s why you don’t receive your pizza as quickly as you would with a burger (because many burgers are pre-made).

On the other hand, when it comes to the foods that people love ordering, pizza is second only to burgers and makes up a large portion of what many people, especially kids, call “fast” food.

2. Who Invented Pizza? Is Pizza Italian?

If you want to know who invented pizza, that depends on what you consider “pizza.” If you think it’s just flatbread cooked in an oven, then it dates back to the Middle East in ancient times when Babylonians, Israelites, and Egyptians all ate this type of dish. The ancient Greeks and Romans added spices and olive oil to their flatbread, which is called focaccia bread today.

Pizzas with tomato sauce, toppings, and melted cheese were first invented by a baker named Raffaele Esposito in Naples, Italy. However, many historians claim that this type of dish was sold on the Italian streets many years before that. The first pizza restaurant in the United States opened in 1905.

3. Why Is Pizza Called Pizza?

It is thought that the first mention of the word “pizza” was in 10th century Italy and that it stemmed from Latin. Modern Greek gives us the word “pitta,” as in pitta bread, which refers to a round flatbread baked in an oven. The Ancient Greek word “pikte” translates to “fermented pastry,” and the Modern Italian word “pinze” refers to pliers or tongs.

The most recent reference to the word is from the Lombardic word “bizzo” or “pizzo,” which can be translated to “mouthful,” “bit,” or “bite.” So the word pizza is thought to have many different origins.

4. Is Pizza Without Cheese Still Pizza?

Definitely! There are so many ways to make pizza, and cheese is just one of the many available ingredients. Vegans eat pizza without cheese all the time and love it. In fact, you can eat pizza with just about anything on it, including foods such as pineapple! Many of the earliest pizzas were made without cheese. As long as you have enough ingredients to satisfy different tastes, it’s guaranteed to be delicious. When you order pizza, you’re essentially getting your own personalized dish. You can have it made with or without anything you like, including cheese.

5. Why Is Pizza So Delicious?

Pizza is delicious because it contains many ingredients that the vast majority of people love. This includes bread, tomato sauce, cheese, and meat. Pizza is also delicious because it’s usually custom made. Customers can order their pizza with almost any ingredient they prefer, which the restaurant will make for them. It’s hard to find someone who doesn’t like the common ingredients found on pizza, which is the main reason for its popularity.

6. Why Is Pizza So Popular?

Pizza is popular for numerous reasons. First of all, it’s very tasty. It can also be made healthy if you choose to put certain ingredients on it, including vegetables and limited amounts of cheese. Pizza is also relatively inexpensive when you compare it to other types of foods found in restaurants. A pizza is custom made in most instances, which means you can buy it without the ingredients you don’t like.

In addition, pizza is easy and inexpensive to make. All of these reasons explain why pizza is so popular, and why there are so many pizza restaurants all over the world these days.

There are several reasons why pizza in Italy is not cut. Unlike pizza in other countries, Italian pizza tends to have a thin, soft crust. Their ingredients are raw and only put on top of the pizza after it comes out of the oven. Italians also use very thin tomato sauce. Their sauce, in fact, is very liquid-like and will go everywhere if they cut their pizza into slices.

It’s essentially for practical reasons that pizza in Italy is not cut into slices. Simply put, the toppings and sauce will go everywhere if it were cut, which means the base of the pizza can turn real soggy.

8. Is It Rude To Eat Pizza With Your Hands In Italy?

It might not be considered rude to everyone in Italy if you eat your pizza with your hands, but common etiquette in that country dictates that you eat pizza with a knife and fork. Pizza in Italy is often served uncut which usually makes it a little awkward to eat it with your hands. When you’re in a restaurant, Italians expect you to eat your pizza with a fork and a knife. However, once it has cooled down a little, it’s ok to use your hands (also read my article: How do Italians eat pizza).

The only exception to this “rule” of etiquette is when you buy a slice of pizza from a street vendor in Italy. When you do that, it’s considered acceptable to eat the pizza with your hands.

9. Why Is Pizza Round But The Box Square?

It does seem odd that pizza is round, the box is square, and we cut the pizza into triangles, but there is a method to this madness. Pizza is round but comes in a square box for two main reasons. First of all, it’s much less expensive to mass produce square boxes than round ones. Round boxes, for the most part, are much more expensive to mass produce, in part because they can’t be constructed from one sheet of cardboard (like with square boxes). The second reason is that with square boxes, storing them is super easy. When the boxes are not in use, they can be stored flat and take up less room than round boxes do. Round boxes can’t be stored flat and on top of each other as easily as with square boxes.

10. Does Pizza Keep You Awake?

Pizza can indeed keep you awake or cause you to get a less-than-perfect night’s sleep. There are several reasons for this. First, cheese is very fatty. Second, pizza in general is very greasy. Third, tomato sauce is acidic. When you combine all of these things, pizza can cause tummy aches or general discomfort. This is why most experts recommend either eating pizza for lunch instead of dinner, or making sure you wait three or more hours after eating the pizza before going to bed.

Now that you know a little more about pizza, I hope that my top 10 frequently asked questions are of help. Who knows you’ll be visiting an Italian pizza restaurant in the (near) future. Well, chances are you’ll have a little advantage. Whatever the reason, I did my very best to explain things as easily as possible. And hey, in case you’re about to visit Italy to taste their freshly made pizzas, check out this article that covers some of these delicious snacks.

Personally I do enjoy a pizza every now and then. Whenever I visit an Italian restaurant, that’s usually what I order. But I can just as well grab a pizza from Pizza Hut once in a while, especially when I’m hungry after a night out. If you’re interested, feel free to also read my frequently asked questions about Pizza hut.

Another one of my favorites is Domino’s. They serve very tasty pizzas as well. And yes, you guessed it right, I have a separate article about Domino’s as well.

Finally, if you serve pizza slices at home, feel free to scroll through my list of fast food decoration ideas. That’s where I cover some fun and helpful gadgets to serve your own snacks in style.