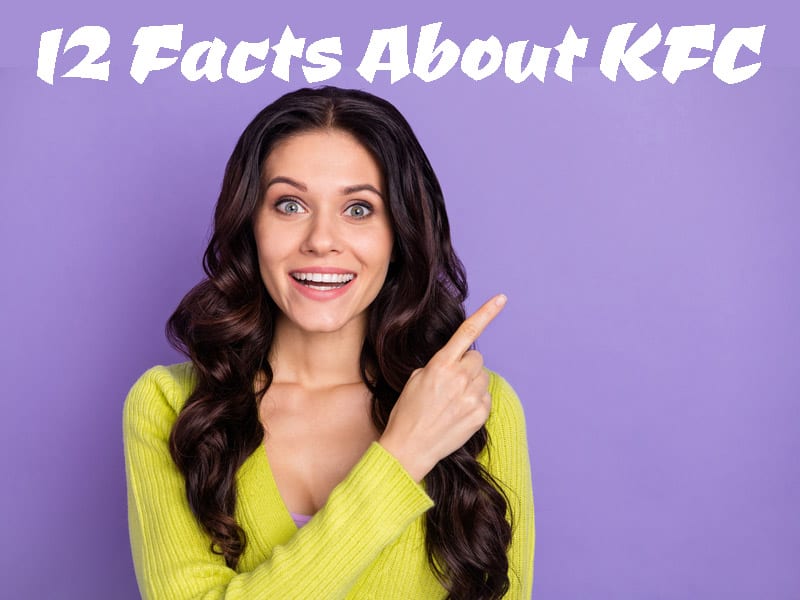 KFC opened its first franchise in 1952, but Col. Sanders was selling his chicken in his roadside cafe starting around 1930. He is famous for his recipe, which contains the famous “eleven herbs and spices” that make his chicken taste different than all the rest.

If you love KFC, this article will help you learn a little more about what makes them so unique and special. For 12 surprising facts about KFC and their yummy chicken, keep reading.

KFC is considered fast food in many ways because you enter their restaurant and place your order, after which your chicken is cooked and delivered in no time. Just as with burgers and tacos, KFC is fast food, simply because of the short amount of time it takes to make and serve food to customers.

Furthermore, KFC’s chicken is tasty, tender, and satisfying to anyone’s palate. If you want to take your time and savor each and every bite while sitting at a table, feel free to do so in one of their restaurants.

KFC chicken is definitely not junk food. Junk food is usually sweet, pre-prepared, and it contains a lot of sugar or fat. In other words, junk food has no “real” nutritional value. KFC food isn’t extremely loaded with sugar and other harmful ingredients, which is why it’s not “really” junk food. I’m not saying that we should have their chicken on a regular basis, that’s a totally different story. However, from a junk food point of view, KFC chicken does not fit into this category.

KFC is known for offering two types of chicken to their customers: Regular and crispy. The crispy is a little bit spicier than the regular chicken. That being said, none of KFC’s chicken is overly spicy or hot. This isn’t Cajun chicken, after all.

The spices they use can be considered mildly spicy. Even if you’re not a big fan of super-spicy foods, it’s very likely that you’ll love both types of KFC chicken. They are flavorful but not too spicy, just like Popeyes, which is the perfect combination for most people.

Whether or not something is spicy, well, that’s also a personal thing. Some people consider Panda Express to be spicy, while others say it isn’t. Remember, we all have our own taste.

KFC hasn’t been around for nearly 100 years by accident. Their menu choices, their tender and tasty chicken, and their overall flavor are the main reasons why people love them. In fact, you rarely run into someone who doesn’t like KFC. At least, that’s my personal opinion.

Ever since 1952 when their first franchise launched, people have fallen in love with the taste of KFC chicken. Customers return to their restaurant because they simply know it’s good. Having the same flavor year after year seems to still never disappoint.

5. Why Is KFC Chicken So Tender?

One of the main reasons why KFC chicken is so tender is because ever since the 1940’s, KFC has cooked their chicken in a pressure cooker with oil. The pressure cooker results in less evaporation, which means that more moisture stays in the chicken.

More moisture equals a more tender piece of chicken. The company has mastered the process without cooking their chicken too long. Finally, KFC always uses fresh chicken that is never frozen, which also makes a difference in the taste.

Yes, KFC is definitely different in different countries, at least when it comes to the menu. For example, Asian KFC branches add rice dishes to their entrees. But each country gives their menu a little local flair and originality. Though their chicken may taste nearly the same wherever you go, different condiments and even different recipes are sometimes used in other countries. So yes, your chicken could taste a little different.

KFC is now available in more than 100 countries. Each of these countries offers something a little unique and different than the KFC franchises in the United States.

My advise is to always do a little research if you order KFC abroad. I’ve had chicken wings in certain countries that were extremely spicy, I mean, really spicy. Not exactly a fun experience, so stay with the “regular” chicken when in doubt.

7. Does KFC Have Burgers?

The current KFC menu doesn’t include burgers. However, in some other countries (such as Indonesia for example) burgers are one of the items on the menu. It’s rumored that KFC tried to offer sandwiches and burgers in the past, but well, I never found them on their menu.

For a fast burger I personally enjoy the Whopper a whole lot (like I explained in my Burger King facts). But other people prefer a Big Mac which I discuss in my most frequently asked questions about McDonalds.

8. Does KFC Marinate Their Chicken?

Yes, KFC does marinate their chicken. They use a mixture of buttermilk and a few other ingredients in which they marinate their chicken for roughly 2 hours. During this 2-hour period, the ingredients soak into their fresh chicken which gives it that typical KFC taste. If you’re interested, I add a link to a tasty KFC recipe at the bottom of this page. I never tried it, but this guide seems delicious already.

9. Does KFC Accept Cash on Delivery?

If you order KFC through a food-delivery service, you can indeed pay with cash. However, you may have to notify the company up front so that their drivers have cash on hand to give you change. As a general rule, it’s always best to pay for KFC delivery orders with either a debit, credit, or gift card. That’s how they usually take payments. If you prefer cash, please also read the next paragraph (fact number 10).

KFC accepts 50- and 100-dollar bills. It’s not a problem most of the time for you to receive change from these bills. If you visit a KFC restaurant when they first open up (so before rush hours), things could be different. Since only a few customers have been placing any orders, chances are your KFC has a limited amount of cash available. Presenting them a 50- or 100 dollar bill at that (early) moment could possibly be a problem. I’d say, just ask one of their employees to be sure.

If you use a food-delivery service, however, the driver may not have sufficient change for these large bills. For home delivery you’re better off paying with a debit or credit card, or the right amount of cash.

11. Does KFC Have Free Refills?

KFC does offer free refills to their customers, although many customers are unaware of this. If you want another soda before heading out of the restaurant, go ahead and bring your empty cup to the workers and they’ll refill it for free. It’s a great way to save a little bit of money and quench your thirst on those really hot days. You can get these refills at most of their 24,000 locations. Exceptions are possible, depending on the manager. So again, asking is always a good and polite thing to do.

Some KFCs offer bottled water, but it’s not free. As far as receiving a cup of tap water without paying for it, that depends on the manager of the facility.

Some people have been refused when asking for a free cup of tap water, while others were made to pay a small amount for the cup itself. Some were given a free cup of tap water without any problems, so it really does depend on where you are and what the policy is at that particular franchise. My personal advise would be to simply ask.

In my opinion, Kentucky Fried Chicken is a great choice for most chicken-lovers out there. Another famous and tasty chicken-fast-food-restaurant is Chick-Fil-A. I guess both of them serve delicious meals. However, if you’re curious about some differences, consider to also read my Chick-Fil-A facts.

Since tastes differ, questions like “Is KFC good” are a personal thing. I always try to answer these frequently asked questions from my own perspective. However, I do also try to listen to what other people have to say. Giving KFC a call or visiting their website can be of great help in case you’re still looking for more answers.

Chicken is a common food to eat and can be enjoyed in multiple ways. For example, I really enjoy my chicken taco once in a while (also read my taco facts article). But even a good old chicken sandwich does the trick for me. Whatever you prefer, KFC is the place to go for a huge amount of people. And, if I may say so, I think that’s understandable.

If you’re curious about making similar chicken at home, check out this KFC style recipe.