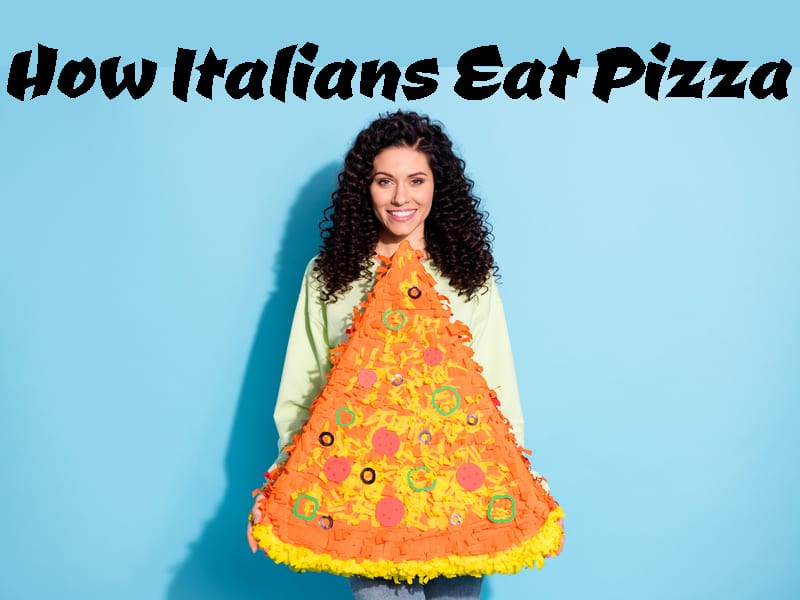 In April 2016, during the heat of the Republican Primaries, John Kasich (the former governor of Ohio) committed the unspeakable “New York Pizza Sin” of eating his slice with a fork. To be fair to Kasich, he’s not the only one. Donald Trump, Sarah Palin, and Bill de Blasio have all done the same.

It may surprise you to learn that native Italians aren’t nearly as shy about digging in with a knife and fork. If you go to Italy, you’ll quickly notice that Italians eat pizza with utensils. So Kasich was doing it right?

How can this be, and what other pizza-eating tricks do Italians have to teach us? Let me explain the details.

If eating a pizza with a fork seems strange, it’s worth remembering that native Italian pizzas are significantly different from whatever you’ve ordered from Domino’s lately.

For one thing, they’re much thinner. One of the big reasons why eating Italian-American-inspired pizzas with your hands is even possible is because the crust is thick enough to pick it up. It’s so easy to enjoy a pizza with your hands while you walk down the street, so why spoil all of that with a fork and knife? In Italy itself, pizza composition is quite different. Pizzas are often both thinner and more delicate. Furthermore, the majority of Italian pizza makers focus on creating culinary art you can taste.

Their thinner, more delicate composition and the respect granted to great pizza make them much more of a sit down meal than they may be abroad, making forks and knives no great sin.

Finally, there’s the fact that pizza is often served fresh and hot right out of the oven. If you try to pick it up with your hands, you’ll likely see the cheese and any topics start to slide (if you don’t burn yourself touching the hot crust first). Now that we know that pizzas in Italy are served hot, forks and knives make a lot of sense. The thinner and delicate crust are another good reason.

2. Circles or Triangles? (The difference in Slices)

Another aspect pizza lovers have to get used to is the fact that “real Italian pizzas” often don’t come precut into different slices. While the idea of a slice of pizza seems obvious, remember that Italian pizzas are served immediately after they come out of the oven. Often before there’s even time to cut them. If they are cut, they may be sliced into triangular thirds rather than several slices, and with cooking scissors rather than a circular cutter. This gets at the heart of one core difference between Italian and Stateside pizzas. The latter are nearly always cut up into pieces and shared among different guests, making pizza one of the ultimate party foods. However, Italian pizzas are usually served in whole circles because they’re meant to be enjoyed as a personal pizza.

3. When to use your Hands

Just because Italian pizzas are served with a knife and fork, it doesn’t mean that these utensils are your only option. It’s possible to eat your pizza with your hands once it has cooled down a bit. You’ll obviously want to make sure that they’re a bit sturdier and made of slightly thicker crust than the average Margherita pizza. I’ll share some examples of Italian pizzas further down below so you understand what I mean. So yes, once your Italian pizza has cooled down a little, it’s not “wrong” to enjoy the remaining parts with your hands.

In the States, pizza has a more casual reputation, played out in countless Coke-and-pizza parties across the country. In Italy, pizzas have a more luxuriant reputation than here in the States. They’re often served with red wine, even though it’s not necessary to drink wine if you don’t feel like it. I don’t drink a lot of wine, but I agree that a good glass of red wine can taste very well with this typical Italian meal.

Italy, like Spain and other parts of the Southern Mediterranean, often gives people a longer lunch (or nap!) break in the afternoon. As a result, they often serve dinner, including pizza, late into the night. The lazy hot afternoon hours can invite people to grab a pizza, but usually these are the less expensive takeaway variations.  The more luxurious Margherita pizzas are served later in the evening. In other words, if you’re running late, don’t worry. You’re not the only one who orders a pizza late at night.

There’s a trend in American pizzas to pile on more and more toppings, turning them into mini feasts. However, that’s not how Italians look at pizzas. In Italy, a pizza should be good with its basic ingredients of meat, dough, sauce, and cheese. Ok, maybe one or two things thrown in, but only occasionally. They don’t pile on topping after topping, and certainly don’t add things such as spicy chicken or pineapple.

7. Know Your Pizza Types (This can be very helpful!)

There are major differences between the thin, gourmet pizza options and the thicker-crusted ones that you eat on the go. In addition, there are many different regional pizza types that you’ll want to try. For example:

Tip: If you’re a pizza fan, consider to also read my Top 10 fun and surprising facts about pizza.

Now that I explained the basics about eating your pizza “Italian style”, who knows you’ll fit in just nicely in a “real” pizzeria. I’m not saying that places like Pizza Hut aren’t “real” restaurants, because they are. What I mean is that typical Italian place where pizzas are prepared according to Italian tradition.

Yes, I personally do enjoy a slice of pizza when I feel like a quick snack. But for me, nothing beats a true Italian version. Well, once in a while. I appreciate both options, and it all depends on your expectations. Understanding the basics about how Italians eat pizza can make me feel comfortable and confident whenever the situation asks for it.

In case any of my readers enjoy cooking, here’s one last final thought. This pizza Margherita recipe shares a lot of helpful tips and tricks about creating that “perfect” Italian pizza. If you like to spend time in the kitchen, who knows this article will help you out big time. I haven’t tried it just yet, but it’s never too late to learn.

Alright, thanks for reading! And hey, if you’re traveling all the way to Italy, don’t forget to enjoy some of their other delicious meals as well.