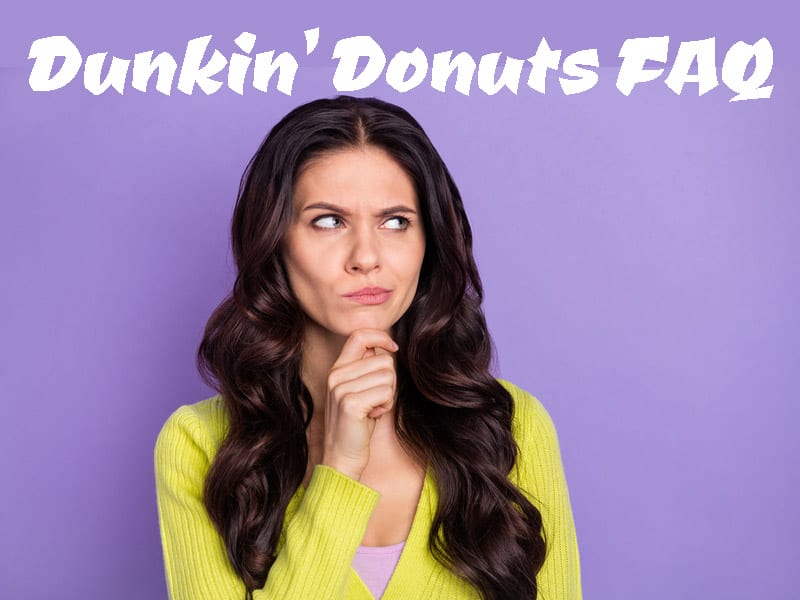 Dunkin’ Donuts is by far one of the most popular donut places with more than 11,000 franchises in 36 countries worldwide. There’s a good reason for that, since their main product is something that everybody loves: Donuts! If you love Dunkin’ Donuts and you’d like to learn a little more, continue to read my 15 frequently asked questions about Dunkin’ Donuts..

By all accounts, Dunkin’ Donuts is indeed a fast-food facility. The products they sell are made all day long. In other words, when customers come in and order something, their food is immediately served. There’s no waiting around for the donuts to be made, in most cases.

It’s also considered fast food because there’s no coming inside, ordering a product, sitting down, and waiting for the product to arrive at your table. The food is cooked fast and served fast, which is the truest definition of the term “fast food.”

2. Is Dunkin’ Donuts a Bakery? Does Dunkin Donuts Bake Their Donuts?

So yes, Dunkin’ Donuts is a bakery and they do bake their donuts, but they no longer make them from scratch because that’s done elsewhere. They call the process “bake on demand,” which is a very efficient way of creating donuts.

3. Does Dunkin’ Donuts Bake on Site?

Yes, Dunkin’ Donuts bakes their donuts on site. Afterwards, they decorate them so that there’s a variety of donuts for customers to choose from. The donuts are made fresh at another location and delivered to the various franchises on a daily basis. Their only job is to bake and decorate the donuts once they receive them.

Even though some people consider Dunkin’ Donuts to be a little on the expensive side, they’re really about average (compared to many other high-quality donut and coffee places). While the prices vary depending on the location, some of the average prices for their donuts are as follows:

Their variety is second to none, but there are numerous reasons why customers love their donuts so much. Dunkin’ Donuts is indeed delicious, at least, that’s what many people (including myself) are saying. If you look at the numbers I just mentioned, I hope this counts as an answer towards this question.

Dunkin’ Donuts coffee isn’t rated the best coffee in America by accident. Their coffee is ground, brewed, and served fresh every day. On average, a fresh pot of coffee is made every 18 minutes or even more often. The chain gets roughly 60% of their annual income from coffee sales. The fact that it’s never stale and never has a “burnt” taste is testimony to their desire to always serve their customers the freshest coffee around.

Dunkin’ Donuts does not sell bottled water, but they do give away free tap water upon request. That being said, they do not give away free tap water to non-customers, only to paying customers who order other items on their menu. If you don’t feel like drinking coffee or a cold drink when ordering a donut, you can simply ask them for a cup of water if you like.

9. Why Is Dunkin’ Donuts So Popular?

Dunkin’ Donuts is popular because they serve two main products that everyone loves: Donuts and coffee. Of course, their menu has become so varied that you can now get breakfast foods, sandwiches and wraps, muffins, croissants, cappuccino, and dozens of other items.

You can literally eat 3 Dunkin’ Donuts meals a day if you wanted to, and I wouldn’t be surprised if some people already tried that. They serve everything made-to-order, so people come back regularly whenever they need a tasty snack or drink.

10. Why is Dunkin’ Donuts Always Out of Donuts?

To many people it seems that Dunkin’ Donuts runs out of donuts frequently. This may or may not be true, but if they do run out of donuts, it’s because their donuts are delivered to them every day via truck. There’s no possible way for the vendor to know just how many donuts a particular franchise is going to sell on any given day.

12. Does Dunkin’ Donuts Let You Use Your Own Cup?

This policy is somewhat different depending on the location, but currently, corporate policy is to not allow people to use their own cups. This may change in the future. If you’re uncertain, just ask one of their employees.

Most Dunkin’ Donuts franchises do indeed have a tip jar. The amount that gets put in there varies depending on the location and the time of day, but some franchises have $50 to $100 per hour put in their tip jars. Tip jars are a great way for crew members to make some extra money on their shift.

Managers do not get paid tips, but crew members do. The tips are added up at the end of the day, and the money is divided equally among the crew members. Most crew members say they earn roughly $40 to $50 per day in tips.

Fun Fact: Did you know there are actual donut socks?

Now that I covered these frequently asked questions about Dunkin’ Donuts, I hope you got something out of it. And hey, if you’re a big donut fan, consider to also read my 7 interesting facts about donuts.

For anyone interested in making his or her own Dunkin’ Donuts at home, I mean similar ones, here’s a great recipe I found. I haven’t tried it yet but who knows I’ll give it a go someday.

Last but not least, if you feel like creating your own personalized donuts at home, go ahead and read my article about mini donut makers. Big fun if you throw a party!