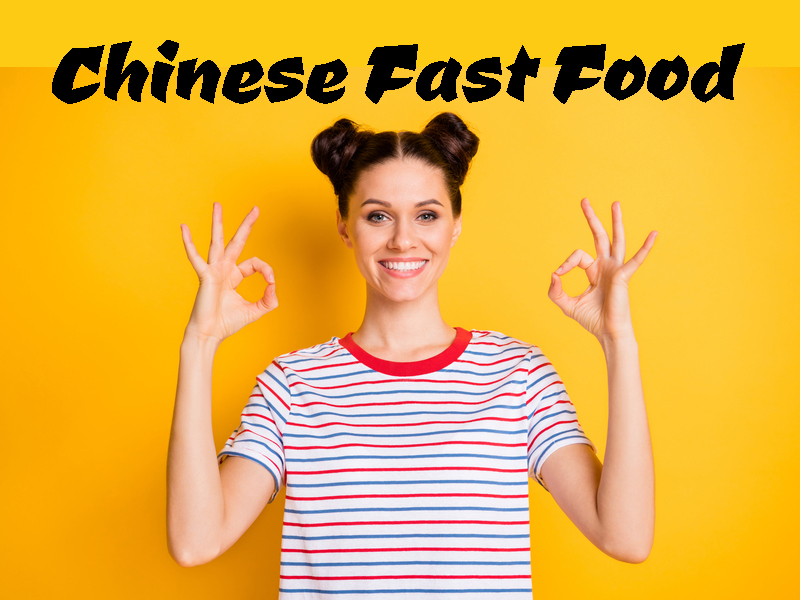 If you read my article about the definition of fast food, this is not an easy question to answer. Yes, Chinese food can definitely be fast food if you grab a quick meal from Panda Express for example (even though this is considered more of an American-Chinese chain). Since your order is ready in let’s say 5 minutes, I do believe that Chinese food can be fast food.

However, Chinese food is obviously not fast food if you decide to visit a typical restaurant. Enjoying a drink, an appetizer, the main dish and even desert does not match the description of fast food. In other words, there’s a “yes” and a “no” to this question.

2. Does China Have Fast Food?

Yes, China hosts loads of different fast food chains. Think of big international brands like KFC or McDonalds, but also national companies that serve anything from chicken with rice to noodle soup.

Just be aware that international fast food chains are way more popular than their domestic ones. According to this Wikipedia article, Chinese fast food chains have never really “taken off” in China. Chinese people seem to prefer foreign brands more, especially since they’re “somewhat exotic” and “clean”.

Oh yes, definitely! According to various articles it seems that people in China visit fast food chains more often than people in the US. More and more international chains are setting foot in China resulting in thousands of various restaurants. Especially KFC is doing really well (I cover KFC in China later on).

So, do Chinese like fast food? They sure do! In my opinion this type of food is only growing within this East Asian country.

4. What Foreign Foods Are Popular In China?

Before I answer this question, keep in mind that popularity sometimes depends on current trends. If something is popular today, who knows what’s popular in the future. However, I can conclude that these are trending foods in China: Chicken, hamburgers, pizza, steak and even spaghetti. In my opinion this is due to the fact that Chinese people are used to their quick and typical own dishes like rice, noodles, pork and various vegetables. These have been on almost every street corner for decades. So maybe it’s time for them to discover and enjoy something new?

5. Are There Tacos In China?

Even though you’re able to get tacos in China, this food is not one of their most popular ones. Both tacos and burritos aren’t exactly a favorite. However, there are some Taco Bell restaurants across mainland China (but I guess just a few). Maybe they’ll gain popularity in the future since trends in taste seem to change over time.

6. Are Hamburgers Popular In China?

I wouldn’t say that hamburgers are extremely popular in China, but they’re definitely growing in popularity. Fast food chains like McDonalds are expanding in China, so I’d say these hamburger-places are still a little “new”. Another thing: The Chinese have their own kind of burger already, so enjoying the McDonalds version is a nice variation.

So, do people in China eat hamburgers? Yes they do, both their own traditional ones as well as the popular international fast food chain versions. Like I said, trends change, so who knows their popularity will rise in the near future.

7. What Is The Biggest Fast Food In China?

KFC (Kentucky Fried Chicken) is the biggest fast food chain in China. The brand has established thousands of restaurants all over the country and people seem to really enjoy their tasty chicken wings. Many even claim that Chinese KFC’s taste better than the ones in the US, probably because of a variation in herbs and spices. The number 2 spot goes to McDonalds. However, like I said, burgers aren’t extremely popular and still gaining traction.

8. Is KFC Popular In China?

Like I said, KFC is the biggest fast food chain in China. The number 2 spot goes to McDonalds. However, like I said, burgers aren’t extremely popular and still gaining traction. In other words, KFC is not only popular in China but also by far the most visited fast food chain compared to others.

KFC was one of the first international brands to operate and expand in China. In my opinion they have a so called “first movers advantage”. Being (one of) the first does help in marketing and gaining trust. They used various methods to promote themselves, sometimes even in combination with famous people. As I already explained, adding local spices and herbs does match the taste of Chinese people. In other words, KFC did a great job in adapting to “what local people prefer”.

10. Did The Chinese Invent The Sandwich?

Last but not least, a “fun” question. Sandwiches are probably one of the most common things to eat. I mean, who doesn’t? People even have sandwich makers at home that do the job on autopilot.

So, did the Chinese invent the sandwich? In a nutshell, it’s not really clear who in fact invented the sandwich. However, a typical Chinese kind of sandwich called “Roujiamo” dates back to around 250BC (give or take). It’s more of a “meat in between bread” kind of dish, maybe a little like a hamburger. Many street vendors in China sell them. Some people say that this was the first ever sandwich, or the first one that we know about. I guess we’ll never really know, and besides, what defines a sandwich anyway? According to various definitions a sandwich consists of 2 slices of bread with something eatable in between. So yes, it’s probably hard to tell who did this first.

In my personal opinion I believe that the popularity of international fast food chains in China is a logical thing. I mean, I like Chinese food because it’s something different. So I guess that some fast food meals are something different for the Chinese as well. Anyway, that’s just my opinion. But I really do enjoy a relaxed evening at a Chinese restaurant.